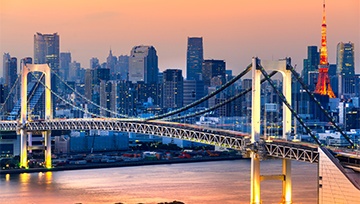 Get Your Free JPY Forecast

The news yesterday in Tokyo hours that the Bank of Japan (BOJ) would be evaluating the side effects of its extremely loose monetary policy next week at its next policy meeting sent a jolt through the Japanese Yen. And yet, the same charge for the likes of the USDJPY or EURJPY wouldn’t readily translate into the same degree of excitement/fear for local benchmarks such as the Nikkei 225. While the index did slide following the news, it looked like it was a controlled descent and not commensurate with the kind of reactions we have seen with other central banks seemingly turning the corner on their own monetary policy regime, such as: the Fed starting to tighten in early 2022; the ECB’s capitulation in following its major counterparts in the middle of last year or even the current speculation that the Fed will have to find a lower peak soon. Given the distraction of US event risk (CPI) and a certain hardening to constant ebb and flow of global rate expectations, the tempered surprise should not be too surprising. Meanwhile, that same combination of factors helped amplify USDJPY’s progressive bear trend. Even with a moderation of response to the BOJ and US CPI news, they combined into the same course perspective for this active cross.

To visualize why the USDJPY was so responsive in a different way, we can consider the perception of major central bank policy stances below. The Federal Reserve has proven itself to be one of the most hawkish players amongst the majors this past year with an aggressive tightening regime which the group itself has projected a peak around 5.1 percent this year. That high forecast earned the Greenback significant buoyancy over the past year with the market eager to price in the implications for carry and growth. Throughout that period, the Bank of Japan maintained its perpetual – and increasingly discordant – stance of extreme accommodation through an essential zero interest rate and unorthodox yield curve control combination…that is until December. In the last central bank meeting, the BOJ surprised by showing it wasn’t unmovable on policy when it slightly widened its band on the 10-year JGB (government bond) yield. Should the central bank continue to tighten the reins – even from this extreme level – it will shake out complacent yield. If broader ‘risk aversion’ were to kick in for the market, it would only amplify that rebalance. 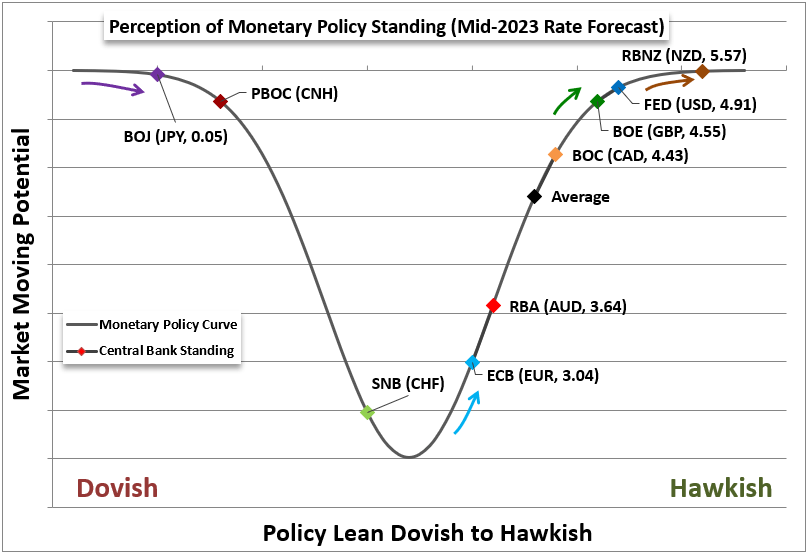 Chart Made by John Kicklighter

When it comes to USDJPY, the progress on the reversal from strong bull trend to multi-decade highs to progressive bearish reversal has been fairly clear in technical structure. For many of the Yen crosses, it is far less distinctive. For the benchmark pair, that is owing to the weight of the Dollar and the distinct shift in view around the Fed forecast. While other pairs may be more choppy in their pictures, the less distinctive USD-centricism is beneficial. It can draw more attention to the broader carry picture and the influence of the Yen in the equation. For GBPJPY, the Bank of England has announced the same fight against inflation as the US, but its own economic forecast has been much more dire. While the 3.50 percent benchmark rate is below the Fed’s 4.25-4.50 percent range, they are not distant carry candidates. Despite the commitment to bring down inflation and the threat of economic contraction, the FTSE 100 has pushed to multi-year highs and is very close to a fresh record. That seems very conflicted and resolution would more likely fall along the lines of localized risk aversion. If that were to happen, the unwind of carry trade here would also likely come with a slide in UK rate forecasts which would compound the drop. 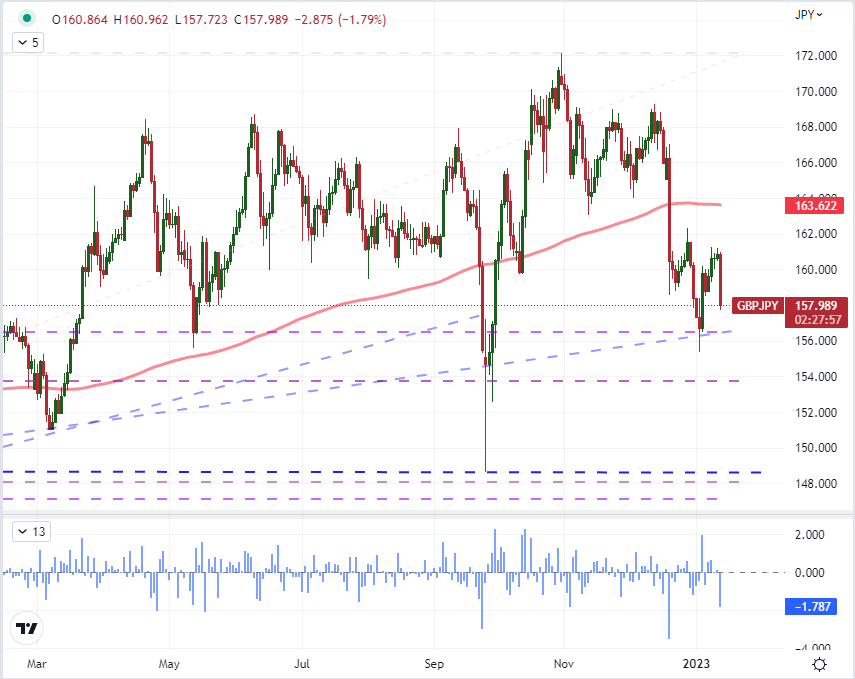 Another Yen crosses with a longer history of carry performance is AUDJPY. The Australian Dollar has a place among the majors as much for its historically high yield backed by AAA sovereign debt as it does through the size of its economy. Here, the big picture technical structure has been provocative in the drawn out head-and-shoulders that has developed around the Reserve Bank of Australia’s (RBA) deceleration from its own hawkish regime before the Fed and other counterparts. The ‘neckline’ break on that pattern happened on December 20th when the BOJ widened its YCC band, but the follow through clearly faltered. That is likely owing to the belief that the modest shift was a symbolic check to the market. But what happens if the central bank indicates that there is actually a ground swell underway? The discussion news came at a good time to push technicians to assess ‘has former support turned into new resistance?’. 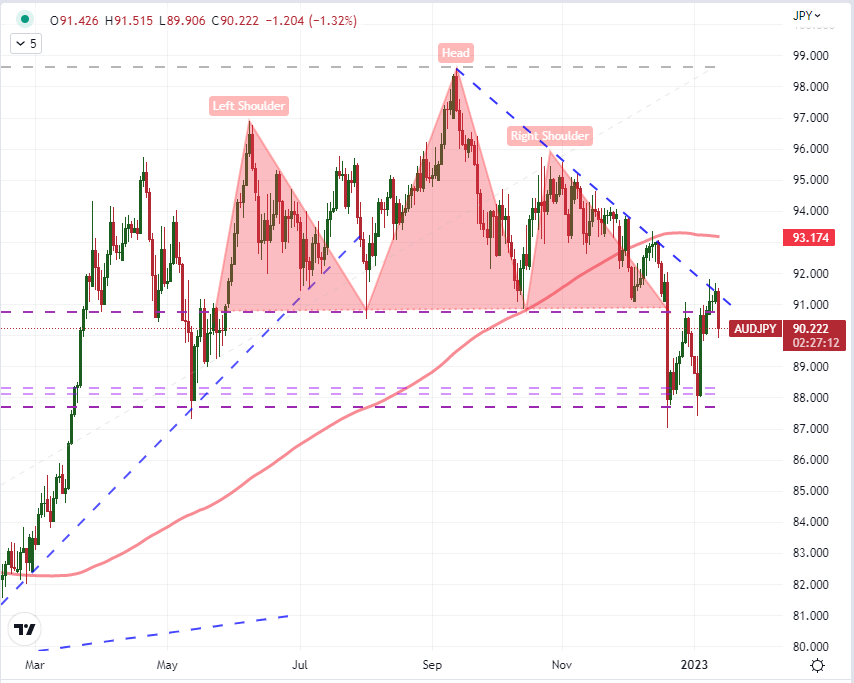