Today we see a flurry of PMI data with manufacturing activity in Japan revealing the slowest rate of growth in nearly a year as Chinese and South Korean demand eases. Worsening economic conditions on a global scale also had a part to play in the latest reading which managed to beat estimates of 51, coming in at 51.5. Overall declines in output and the fastest slowdown in new orders since October 2013 were the standouts in the August report.

As such, EUR/JPY has advanced above the prior level of resistance at 138.32 and now attempts to break above the zone of resistance which comprises of the 23.6% Fib retracement (139.57) of the 2022 major move and the April swing high at 140. Failure to continue the recent bullish momentum highlights the 138.32 level of support, followed by the 38.2% Fib retracement at 136.67.

Taking a look at the USD/JPY pair, slowing momentum still managed to mark a new 24-year high – around 139.68 – but has pulled back somewhat since. The emergence of upper and lower wicks suggests a fair amount of directional uncertainty just below the important psychological level of 140.

We could see the pair stall here or ease slightly as markets prepare for US NFP data, which is expected to show an addition of a further 300k jobs in the US for August. A seemingly untouchable jobs market helps continue the hawkish Fed narrative which is supportive of the dollar at the expense of dovish central bank currencies like the yen. 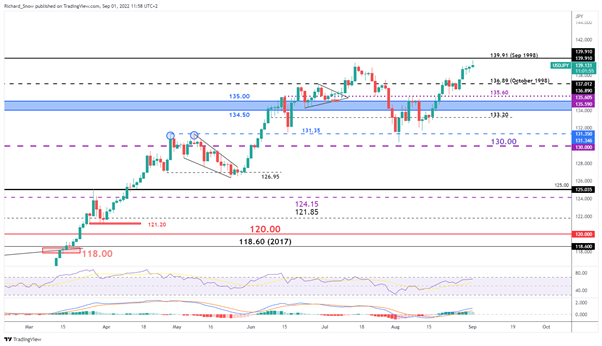 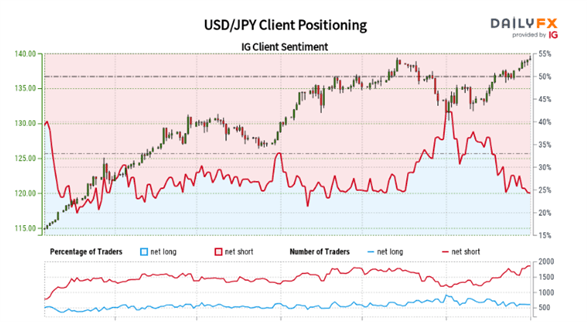 We typically take a contrarian view to crowd sentiment, and the fact traders are net-short suggests USD/JPY prices may continue to rise.

Traders are further net-short than yesterday and last week, and the combination of current sentiment and recent changes gives us a continued USD/JPY-bullish contrarian trading bias.