US Dollar Price and Chart Analysis

The US dollar basket (DXY) broke above 110 early today for the first time in over 20 years as the greenback’s dominance of the FX market shows no sign of abating. The DXY is up over 21 big figures since the start of 2021 – a 23.5% rally – and further gains look likely if the ongoing energy crisis in Europe remains. The US dollar basket is calculated by factoring in movements in six major currencies with the Euro having a 57.6% weighting in the calculation. Weakness in the single currency shows up as a strength in the US dollar basket.

While today’s move higher may be exacerbated by US Labor Day holiday-thinned market conditions, the move higher in the DXY looks set to continue. The US is ahead of the rest of the world’s central banks in the rate hiking cycle, despite Fed chair Powell leaning on ‘transitory’ for too long, and with the US jobs market remaining robust, US rates can stay higher for longer if needed to break inflation.

The Euro has weakened further against the US dollar today – breaching 0.9900 in early turnover – after Russia announced that it would keep the Nord Stream pipeline closed after three days of maintenance. Gas prices across Europe soared, ramping up pressure on European leaders to try and quell soaring domestic energy bills. The EU had been prepared for Russia to cut energy supplies completely, but the announcement over the weekend caused energy prices to soar once again. EU leaders are expected to announce a range of proposals to keep domestic energy bills from rising further, while in the UK, Liz Truss said recently that she would announce an immediate package of support and tax cuts if she won the keys to No.10.

Sterling is also under pressure after the latest UK Composite PMI figures showed the economy contracting in August. Chris Williamson, chief business economist at S&P Global Market Intelligence noted, ‘Although the survey data are currently consistent with the economy contracting at a modest quarterly rate of 0.1%, deteriorating trends in order books suggest the incoming prime minister will be dealing with an economy that is facing a heightened risk of recession, a deteriorating labour market and persistent elevated price pressures linked to the soaring cost of energy.’

Looking at the latest DXY monthly chart shows little in the way of resistance ahead. Prior monthly highs may slow any move higher but as these were made around 20 years ago their effect in slowing any further rise in the DXY are likely limited. The US dollar looks overbought but that doesn’t mean that it won’t move higher as the greenback remains the currency of choice. 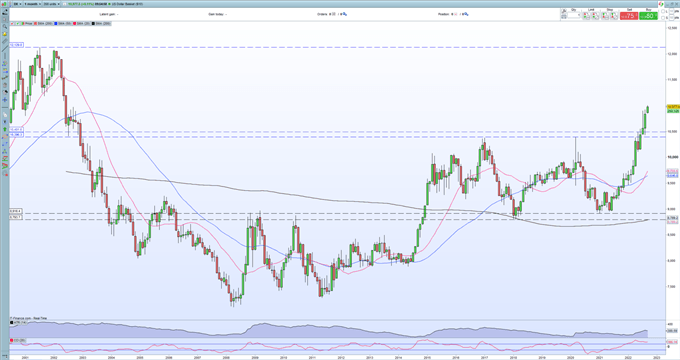 What is your view on the US Dollar – bullish or bearish?? You can let us know via the form at the end of this piece or you can contact the author via Twitter @nickcawley1.