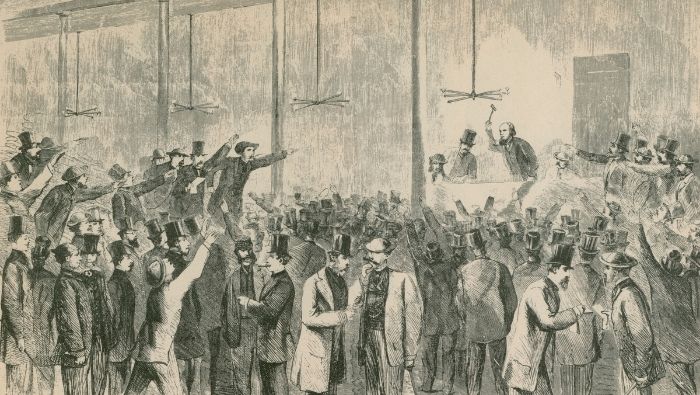 US equities showed a bearish reaction mid-day in yesterday’s session. What started out as a bullish breakout to start the week soon turned around and prices in the S&P, Nasdaq and Dow all retreated to key spots of support ahead of Jerome Powell’s speech this morning.

That speech didn’t have much by way of new information and the lack of any shock-effect helped those supports to hold, leading into a bounce in today’s session. Prior price action structure remains in-place ahead of the Thursday CPI report and, at this point, the Dow Jones Industrial Average still looks to be the cleanest shirt in the dirty laundry.

The Dow set up an ascending triangle formation last week. This showed up after a key support test at a major spot on the chart, around the 32,789 level which was a swing high from September. Given the timing, that price was also confluent with a trendline projection that held the highs in the Dow for much of last year, until the Q4 breakout.

The support test at that trendline projection was on December 20th (marked by the red box on the below chart), and after that, prices continued to hold higher-lows along a bullish trendline. But price couldn’t breakout – a cap had held around a prior support level, at 33,623. Collectively, this horizontal resistance combined with higher-low support set up the ascending triangle formation and that started to give way on Friday. Yesterday saw prices pullback and today showed a support response at that prior spot of resistance.

This keeps the door open for bulls and for those looking at ways to voice bullish US equity stances, the Dow is carrying one of the more bullish backdrops for US equity indices at the moment.

The S&P 500 remains well-below its own 2022 bearish trendline. There was one flicker above that line last year, and it was in December around a CPI release. Notably CPI came in below-expectations, but stocks still reversed, leading to the push back to 3802-3810 support which held like a rock through the end of December.

As that support was building another consolidation formed by way of a symmetrical triangle formation. This is marked by both lower-highs and higher-lows and this formation finally gave way last Friday as prices pushed up to range resistance at the 3912-3928 area on the chart.

Yesterday saw breakout continuation – until the afternoon pullback, that is, with price retreating right back to support from prior resistance. This time, that support played-in off the top of the symmetrical triangle. This led to a bounce and, similarly, can keep the door open for short-term bullish scenarios. The next spot of short-term resistance is 3947, after which yesterday’s high at 3973 comes into the picture. And above that, 4k looms large as the psychological level is also a Fibonacci level that’s exhibited multiple inflection points for the S&P 500 over the past seven months.

For bears – it’s about the 3895 level, at least initially. If sellers can push through that, particularly if we haven’t yet tested through the 3973 high, and the door will begin to open to a series of lower-lows and lower-highs. Initially, this puts focus on a trip back to range support in the 3802-3810 area. But, depending on how CPI rolls out, there could be scope for more.

If/when sellers can break-below that area, there’s another fairly clear zone of support sitting about 5% lower, from the 9763 level which was the pre-pandemic swing high, all the way up to the 10,002 Fibonacci level, with the 10k psychological level also of consideration in that zone.

While the S&P broke out of its recent range yesterday, the Nasdaq remains mired in its own. I’m tracking range resistance around 11,404 and there’s another major level a bit-higher that could be interesting for bears if it comes into play, around 11,700. This is a Fibonacci level that had quite an impact as both support and resistance last year.

On the support side of the matter, there’s a spot just above the 11k psychological level after which 10,870 comes into play. The bottom of range support is at 10,751 and if sellers can push down there, the door may start to open to bigger-picture breakdown themes. But caution is warranted as there’s already been multiple bearish advances snuffed out by this zone: So, it’s support until it’s not. When it does break, the follow-through could be significant.