Get Your Free JPY Forecast

The Japanese Yen gained about 0.5 percent during the early hours of Thursday’s Asia-Pacific trading session. Reports crossed the wires from Yomiuri Shimbun, one of the top 5 major newspapers in Japan, that the Bank of Japan is going to inspect the side effects of ultra-loose policy at their interest rate decision next week. Major news outlets widely cited this developing story as well.

Further details showed that policymakers could consider adjusting bond-buying as well as make further tweaks if necessary. This is not terribly surprising as back in December, the central bank’s policy pivot induced further speculation of potential further tightening this year. Unsurprisingly, these prospects are offering some support for JPY.

Broadly speaking, the Yen has also been indirectly benefiting from the more dovish shift that markets are pricing in for the Federal Reserve. Over the past 24 hours, Treasury yields faded ahead of Thursday’s hotly anticipated US inflation report. Markets are seemingly pricing in a Fed pivot that comes sooner following softer US economic data earlier this month.

Looking toward the APAC trading session, it might be difficult for the Yen to find meaningful follow-through until the US CPI report passes at 13:30 GMT. That said, gains on Wall Street could improve risk appetite. This might drive demand for Australia’s ASX 200 and Hong Kong’s Hang Seng Index. But, prospects of a less-dovish BoJ might do some damage to Japan’s Nikkei 225.

The Japanese Yen continues to mark time against the US Dollar on the daily chart. Namely, USD/JPY has been unable to pierce under the 103.39 – 131.73 support zone. Instead, prices have been consolidating under the falling trendline from October. Positive RSI divergence persists, showing that downside momentum is fading. That can at times precede a turn higher. In USD/JPY’s case, that would expose the 50-day Simple Moving Average for key resistance. Otherwise, breaking lower opens the door to revisiting the May 2022 lo at 121.31. 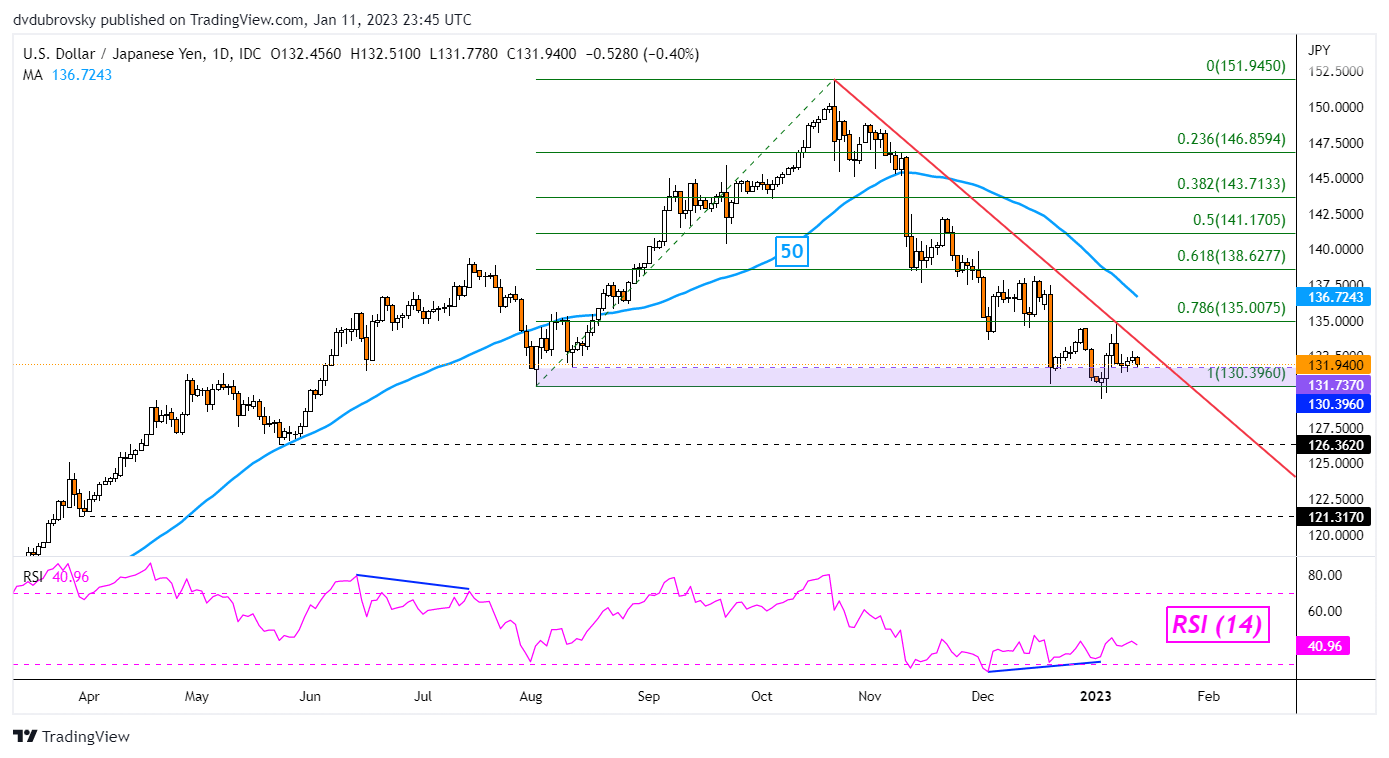