The price of gold extends the rebound from the monthly low ($1728) as it snaps the series of lower highs and lows from last week, but failure to push back above the 50-Day SMA ($1769) may undermine the recent rebound in bullion as the moving average continues to reflect a negative slope.

The price of gold increases for the second day to largely track the rise across precious metals, and bullion may stage a larger recovery over the coming days as the update to the US Personal Consumption Expenditure (PCE) Price Index is anticipated to show a slowdown in inflation.

The core PCE, the Federal Reserve’s preferred gauge for inflation, is expected to narrow to 4.7% in July from 4.8% per annum the month prior, and signs of easing price pressures may prop up the price of gold as it dampens bets for another 75bp rate hike.

In turn, the development may encourage the Federal Open Market Committee (FOMC) to adjust its approach in combating inflation as the central bank acknowledges that “it likely would become appropriate at some point to slow the pace of policy rate increases,” and it remains to be seen if the committee will alter the forward guidance at its next interest rate decision on September 21 as Chairman Jerome Powell and Co. are slated to update the Summary of Economic Projections (SEP).

Until then, the price of gold may stage a larger rebound as it snaps the series of lower highs and lows from last week, but speculation surrounding the Fed’s hiking-cycle may influence the precious metal as the central bank prepares US households and businesses for a restrictive policy. 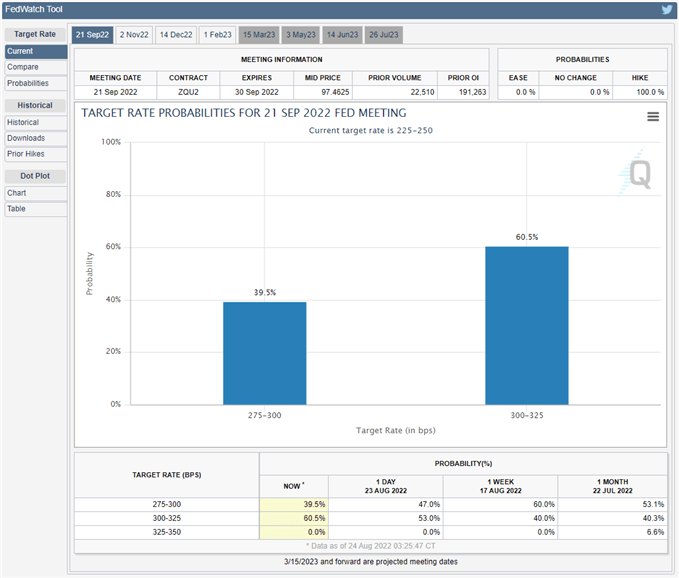 In turn, the price of gold may continue to track the negative slope in the 50-Day SMA ($1769) as the CME FedWatch Tool now reflects a 60% probability for a 75bp rate hike, and the precious metal may face headwinds over the remainder of the year if the central bank forecasts a steeper path for US interest rates.

With that said, a slowdown in the US PCE index may lead to a larger rebound in the price of gold as it encourages the FOMC to implement smaller rate hikes, but the advance from the yearly low ($1713) may turn out to be a correction in the broader trend as the precious metal fails to defend the opening range for August. 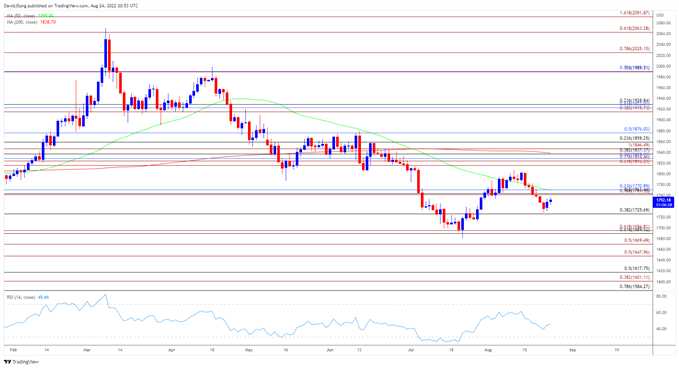