Euro Forecast (EUR/USD) – The Calm Before the Jackson Hole Storm?

For all market-moving economic releases and events, see the DailyFX Calendar

While today’s numbers are marginally better than forecast, the German economy is seen contracting in the next two quarters, the officially accepted definition of a recession. Rampant inflation and sky-high energy prices are severely disrupting the Euro Zone’s largest economy as the country’s decades-old dependency on Russian energy return to haunt Germany.

The latest German Ifo data also beat expectations, but uncertainty among companies remains high. According to the Ifo Institute, ‘a bleak mood hangs over the German economy’, with companies across a range of industries remaining pessimistic despite the current situation improving marginally.

Today’s data had little effect on the single currency as traders move to the sidelines ahead of Fed chair Jerome Powell’s speech on Friday at the Jackson Hole symposium. Before Mr. Powell’s speech, traders will get to mull over the second reading of US Q2 growth (today at 13:30 UK) and the central bank’s preferred inflation reading, Core PCE (Friday at 13:30 GMT).

Later on today the latest ECB minutes will be released (12:30 UK) and may give the market more clarity behind the central bank’s decision to hike rates by 50 basis points and for the outlook for interest rates in the coming months. Over the course of this month, Euro Area bond yields have moved noticeably higher as traders price in a more hawkish ECB. In the 10-year space, German Bunds yield 1.36% (+58bps), while Italian BTPs trade at 3.65% (+67bps). Italian borrowing costs will be closely monitored by the ECB and any further rally in yields may force the central bank to step in and stem the rise.

After breaking parity on more than one occasion this week, EUR/USD is likely to enter a holding pattern between 0.9900 and 1.0050 ahead of Friday’s speech by chair Powell. While the outlook for the short-term remains unchanged around current levels, looking further ahead the pair look set to weaken further, especially if chair Powell doubles down on his hawkish stance on Friday. On the flip side, the pair may use parity as a level of support if the Fed signals that growth worries are now returning to the fore. 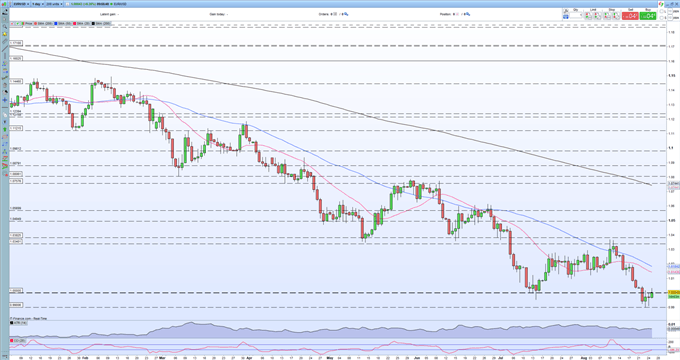 We typically take a contrarian view to crowd sentiment, and the fact traders are net-long suggests EUR/USD prices may continue to fall. Positioning is less net-long than yesterday but more net-long from last week. The combination of current sentiment and recent changes gives us a further mixed EUR/USD trading bias.

What is your view on the EURO – bullish or bearish?? You can let us know via the form at the end of this piece or you can contact the author via Twitter @nickcawley1.